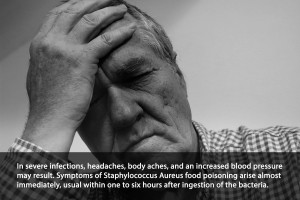 “Staphylococcus” is a bacterium found on the skin and hair and in the throats and noses of humans and animals alike. In fact, staphylococcus is present in 25 to 50 percent of healthy people. The risk results when the bacteria multiply and produce a heat-resistant toxin that causes human illness.  The symptoms of this toxin include nausea, vomiting, diarrhea, severe stomach aches, fever, and loss of appetite. In severe infections, headaches, body aches, and an increased blood pressure may result. Symptoms of Staphylococcus Aureus food poisoning arise almost immediately, usual within one to six hours after ingestion of the bacteria.

Symptoms usually persist for two days, but may take longer to subside in more severe cases. To combat dehydration caused by the symptoms, fluids and rest are the most effective remedies. Death is rare, but some deaths have occurred among the elderly, infants, and immunocompromised or disabled individuals. 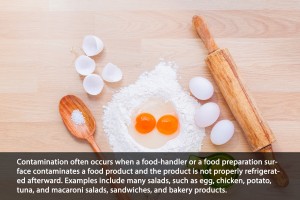 Staphylococcus is present everywhere you look.  It can be found in air, dust, sewage, contaminated water, milk, foods, food equipment, humans and animals.  The bacteria can be passed from person to person. Contamination often occurs when a food-handler or a food preparation surface contaminates a food product and the product is not properly refrigerated afterward. Examples include many salads, such as egg, chicken, potato, tuna, and macaroni salads, sandwiches, and bakery products.  Bacterial growth also commonly occurs in foods that initially require a lot of handling and preparation and are kept at somewhat high temperatures after preparation, such as those kept under heating lamps on a buffet.  Other common food sources include dairy products, various meats and egg products.

Anyone can contract Staphylococcus and the intensity of symptoms will vary from person to person. Individuals who eat out frequently are at a higher risk for infection, as a main source of contamination comes from unwashed hands or unsterilized food preparation surfaces.  Individuals who constantly come into contact with sick persons are at a higher risk, such as hospital personnel. Complications may frequently result in infants, the elderly, and immunocompromised or disabled individuals.

Diagnosis can be referred to as “Staphylococcal food poisoning,” “Staphyloenterotoxicosis,” or “Staphyloenterotoxemia.” The most effective way for a medical doctor to determine the specific illness is by testing the food suspected of causing the illness.  The bacteria can also be isolated from the infected person him or herself.

Not all people infected with Staphylococcus Aureus food poisoning can recover for their pain and medical bills because of the multitude of possible sources of the bacteria.  However, because these bacteria evolve so quickly, it is possible to trace the source through serotyping.  You can read more about how outbreaks are idenified on our website.  Please contact us for a free consultation if you believe your Staphylococcal food poisoning was associated with a recent outbreak.