Recovery and Long-Term Effects on Shigella 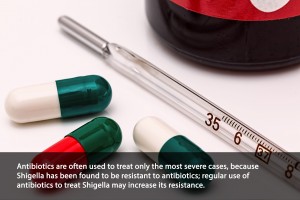 Most infected individuals recover without seeking medical attention within five to seven days following discovery of the initial symptoms.  Treatment with anti-diarrheal medicines should be avoided, according to the Centers for Disease Control, as its use may make symptoms worse and lengthen recovery time. Antibiotics may lessen the severity of symptoms and shorten the duration of recovery. Antibiotics are often used to treat only the most severe cases, because Shigella has been found to be resistant to antibiotics; regular use of antibiotics to treat Shigella may increase its resistance.  It can take up to several months before an individual’s intestines return to normal state. Fortunately, hospitalization for Shigella is rare and a very small percentage of individuals (approximately 2%) develop any long-term effects, such as joint pain, painful urination, and eye irritation. Joint pain, referred to as “post-infectious arthritis” only occurs in individuals who are genetically predisposed to develop it.

How Shigella is Contracted

Shigella can be passed from person to person. Food and water sources can become contaminated with infected feces, and their ingestion causes the resulting infection.  Food handlers who prepare meals with unwashed hands are a primary cause of outbreaks. To add, outbreaks are often attributed to swallowing water from a source that has been contaminated by sewage. Vegetables grown in and harvested from fields that have been irrigated with water contaminated by sewage are also a common culprit.  At times, flies that breed in feces may land on food, contaminating it. 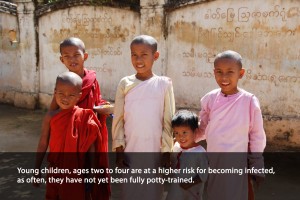 Anyone can contract Shigella, though it is most commonly a problem in the developing world, where, lacking proper medical care facilities, deadly epidemics can develop. “Shigella Dysenteriae Type 1” is usually the cause of such epidemics in the developing world.  Travelers to such areas should be alert to the possibility of contaminated water and food sources and should drink boiled or treated water only.  Young children, ages two to four are at a higher risk for becoming infected, as often, they have not yet been fully potty-trained.  Because of this, other children, family members and caretakers who come into contact with such young children should engage in frequent hand-washing, especially after assisting with toilet training or changing diapers.

Shigella infection is diagnosed as “Shigellosis.”  A medical doctor can determine infection by testing the stool sample of a person suffering from the symptoms produced by Shigella. Lab tests can also assist medical personnel in determining which antibiotic would be most effective in treating the particular type of bacteria causing the illness, if necessary for recovery.

If you or a loved one suspect that you contracted Shingella, please contact the Law Firm immediately for your free consultation.