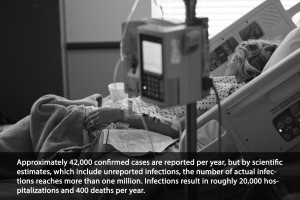 “Salmonella” is the second most common domestic foodborne illness.  Approximately 42,000 confirmed cases are reported per year, but by scientific estimates, which include unreported infections, the number of actual infections reaches more than one million. Infections result in roughly 20,000 hospitalizations and 400 deaths per year.  Symptoms of Salmonella food poisoning infection include diarrhea, fever and cramps arising within twelve to twenty-four hours after infection and, in most healthy individuals, persist for five to seven days. Infection is more common in summer months than in other seasons of the year. 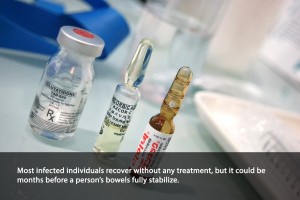 Most infected individuals recover without any treatment, but it could be months before a person’s bowels fully stabilize.  Hospitalization can result from dehydration caused by the symptoms but, in some cases, seeking immediate medical attention may be a matter of life or death. Salmonella food poisoning infection can spread from the intestines to the blood stream, carrying it to other areas of the body. In such a case, infection can pose a significant risk of death, unless the infected person is quickly treated with antibiotics.

How Salmonella is Contracted

Salmonella bacteria are found in the intestines of humans and animals alike.  Infection generally arises from ingesting foods contaminated with animal feces, but can also be contracted from food handlers who fail to adequately wash their hands after restroom use.  Animal food products are the most common sources of infection, such as eggs, milk and meat. However, any food product is capable of being contaminated.  Salmonella bacteria can be reduced or eliminated by cooking foods fully and properly. Handling animals, such as birds, reptiles and domestic pets, can also be a source of infection.

Salmonella food poisoning can be contracted by anyone. However, children, the elderly and the immunocompromised are more likely to suffer from severe infections.  Overall, infant children are most susceptible to contracting the bacteria.

The medical term for infection with Salmonella bacteria is “Salmonellosis.” Medical facilities can identify the bacteria by conducting a lab test on an infected person’s stool. The specific strain of the virus, of which approximately 2,500 have been identified, can be determined with further testing called “serotyping.”

If you have contracted salmonella, contact the Law Firm immediately.  We will work tirelessly to recover for your pain, suffering, lost wages and medical bills.