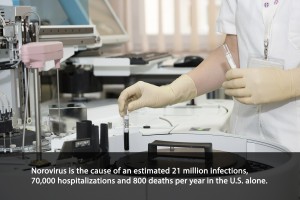 The most common foodborne illness in the United States is the “Norovirus,” the cause of an estimated 21 million infections, 70,000 hospitalizations and 800 deaths per year in the U.S. alone.  Norovirus is highly contagious and can be transmitted from one infected person to another, but the virus is generally contracted by exposure to contaminated food or water.  Those exposed report flu-like symptoms including nausea, vomiting, diarrhea, low-grade fever, cramping, headaches and body aches.  Symptoms can persist for up to three days in a healthy person and can persist for up to six days in individuals who are at higher risk for infection, such as children, the elderly and the immunocompromised.  Hospitalization can result not only from the severity of the symptoms alone, but also from dehydration caused by the symptoms.

How Norovirus is Contracted 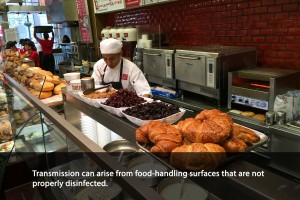 Norovirus is most commonly contracted by ingesting contaminated food itself.  Improperly washed or unwashed fruits and vegetables are potential carriers of the virus.  In addition, shellfish is a common source of infection, as steaming, common in the preparation of shellfish, does not adequately heat the food to kill the virus.  Norovirus can survive in temperatures up to 140 degrees.

Norovirus transmission can also arise from food-handling surfaces that are not properly disinfected; if a food-handling surface is contaminated by a food product containing the virus, the virus can transfer to foods placed on the same surface. Outbreaks have occurred from contaminated food processing facilities, such as those producing deli meats. Likewise, if food is prepared by an infected person, the infected person may contaminate the food, especially when the person has improperly washed and sanitized his or her hands.

Outbreaks have also been caused by contaminated drinking water. Previous outbreaks were found to be caused by food irrigated with or grown in water contaminated by sewage, such as raspberries and oysters.  Drinking water has been found to cause outbreaks of infection in particular communities, either when the community’s water source has been contaminated by a septic tank leak or when a municipality’s water treatment facility did not fully disinfect the water.

Persons & Communities Most Commonly Affected by the Norovirus

Although Norovirus can be contracted by anyone, some individuals are more susceptible due to their age, health, environment or the communities in which they live. Children, the elderly and the immunocompromised are susceptible to a greater severity and longer duration of symptoms.  Deaths most commonly occur among the elderly.

Outbreaks most frequently occur in nursing homes.  Certain environments are ripe with potential for infection, such as hospitals, schools, child-care centers, prisons and military bases. Outbreaks also regularly occur in certain vacation and social settings, such as cruise ships, and among attendees of specific events and restaurant patrons. For an unexplained reason, Norovirus infections occur more often in the winter.

The virus causes the stomach, intestines, or both to swell or become inflamed.  The medical term for this condition is “acute gastroenteritis.” Medical facilities can detect the virus by testing an infected person’s stool or vomit.  The virus can be detected in a person’s stool even before the person exhibits symptoms and for up to two weeks after symptoms have subsided. In addition, experts can detect the virus by testing the food or water believed to be the source of the virus.

If you have contracted salmonella, we will work tirelessly to recover for your pain, suffering, lost wages and medical bills.