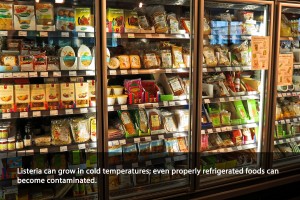 “Listeria Monocytogenes” is a bacterium responsible for an estimated 1,600 illnesses each year in the United States. Of the estimated number of cases, approximately 260 of those end in fatality. Listeria food poisoning outbreaks in 2011 and 2012 have been widespread among multiple states arising from widely distributed food sources. Listeria can grow in cold temperatures; even properly refrigerated foods can become contaminated.

Symptoms of Listeria infection are flu-like in nature.  Symptoms usually begin with diarrhea, but can also include fever, body aches, headaches, stiffness in the neck, loss of balance, disorientation and convulsions. Other gastrointestinal problems may develop from Listeria exposure as well, such as a general irritation of the digestive tract. However, in healthy individuals, no symptoms may develop despite infection.

Symptoms of Listeria food poisoning usually arise twenty-four hours after ingestion and may persist for two days in healthy individuals.  Individuals who are prone to infection may have longer lasting and more complicated symptoms. Listeria can be treated with antibiotics, and antibiotic treatment may be required for individuals falling into one of the high-risk groups described below.  Some complications are especially hazardous for pregnant women.  Pregnant women should be particularly careful to guard themselves against exposure to contaminated foods, as infection can lead to miscarriage, stillbirth, premature delivery, and a possible life-threatening development of infection in a newborn.

How Listeria is Contracted 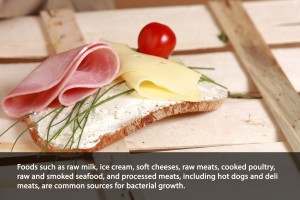 Listeria is contracted by eating foods contaminated with the bacteria Listeria Monocytogenes. The bacteria can be killed by pasteurization and proper cooking.  Animals carry the bacteria found in water and soil and contaminate foods derived from those animals.  Foods such as raw milk, ice cream, soft cheeses, raw meats, cooked poultry, raw and smoked seafood, and processed meats, including hot dogs and deli meats, are common sources for bacterial growth. Raw vegetables may become contaminated by being irrigated with contaminated water or growing in contaminated soil.

Though anyone can become infected, healthy individuals and those not included in the established risk groups rarely become severely ill. The established risk-groups include older adults, pregnant women, newborns and the immunocompromised. Pregnant women are thirteen times more likely to become infected and suffer complications than the rest of the population.  Newborns may be born with the infection if their mothers ingested contaminated food while pregnant.  Bacteremia or meningitis may occur in the newborn, though the most serious effects of the infection occur while still in the womb.  The immunocompromised, persons with cancer, AIDS, diabetes, liver disease, kidney disease and alcoholics, are likely to suffer severe symptoms and complications.  Adults living with AIDS are up to 300 times more likely to develop serious symptoms than the general population.

The diagnostic term, which includes all resulting symptoms and some complications of Listeria infection is “Listeriosis”.  A medical doctor will be able to determine infection by testing a person’s blood or spinal fluid. In older adults and the immunocompromised, meningitis and septicemia are common signs of Listeria infection. Testing results can usually be obtained within two days.

If you or a loved one have been diagnosed with Listeria food poisoning and you suspect it is related to a recent food recall, contact The Law Firm and we will work tirelessly to recover for your loss.