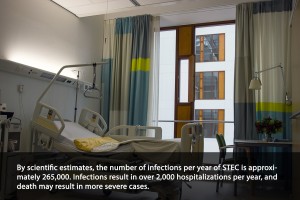 “E. coli” refers to a group of bacteria. Though human and animal intestines normally contain certain types of E. coli bacteria that are harmless, exposure to some strains can cause severe illness in humans – E Coli poisoning. There are six identified strains of E. coli known to cause illness in humans.  The most commonly reported strain is termed “Shiga toxin-producing E. coli,” abbreviated as “STEC.”

By scientific estimates, the number of infections per year of STEC is approximately 265,000. Infections result in over 2,000 hospitalizations per year, and death may result in more severe cases. The toxins produced by STEC cause the symptoms experienced by those exposed. Symptoms of E. coli include stomach cramps, diarrhea (which can be bloody), high fever, and intense vomiting.  At times, the bacteria can affect the body outside of the intestines, resulting in urinary tract infections, respiratory illnesses, such as pneumonia, and other illnesses. Symptoms usually arise within three to four days after ingestion, but, in some cases, can arise within one day or up to ten days after exposure.

Most infected individuals recover without medical attention, as symptoms can often be successfully treated with increased hydration and rest.  Treatment with anti-diarrheal medicines should be avoided, as these medicines hinder the intestinal tract’s ability to eliminate the bacteria. To add, antibiotics should not be taken, as they have been found to be ineffective and could actually have an adverse effect. Most infected persons recover in about one week from E Coli poisoning.

In some cases, seeking immediate medical attention may be required. In an estimated 5-10% of cases, infected individuals may develop a very serious, life-threatening condition called “Hemolytic Uremic Syndrome,” or “HUS.”  HUS may cause the kidneys to stop working, and other serious problems may arise. Though most individuals who develop HUS recover within weeks, some may suffer lasting damage, and fatality is always a threat. The symptoms of HUS include infrequent urination, fatigue, and a loss of pink coloring in the cheeks and lower eyelids. Symptoms usually develop about seven days after the initial symptoms of E. coli infection began. The use of anti-diarrheal medicines or antibiotics to treat the initial symptoms of E. coli infection have been associated with an increased risk of developing HUS.

How E. coli is Contracted 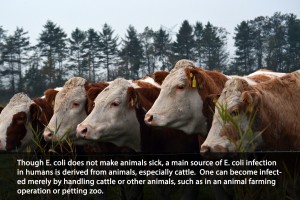 Though E. coli does not make animals sick, a main source of E. coli infection in humans is derived from animals, especially cattle.  One can become infected merely by handling cattle or other animals, such as in an animal farming operation or petting zoo. E. coli is especially prevalent in undercooked hamburger meat. Ground meat is prone to contamination while being processed, as the meat may become infected with the animal’s intestines or feces during slaughterhouse processing. Other sources of illness can come from drinking unpasteurized milk or contaminated water, and, of course, exposure can result from contamination by a food-handler’s unwashed hands.  Swallowing lake or swimming pool water has been found to be a source of infection. Contact with an infected person’s feces has also been found to be a source, such as when changing an infant’s diapers.

Anyone can contract E. coli poisoning.  However, children and the elderly are more likely to suffer severe and lasting symptoms. The immunocompromised are also at greater risk for severe symptoms. Individuals who consume unpasteurized milk, unpasteurized apple cider, and soft cheeses made from raw milk are at a higher risk of contraction, as these foods are commonly associated with E. coli contamination.

A medical doctor will be able to determine infection by testing a person’s stool sample for Shiga toxins.  Outbreaks can be determined by identifying a specific strain of STEC.  Thus, though most medical labs can determine the existence of infection, special labs can specifically identify the strain.  Specific identification is essential to protecting the public from exposure and outbreaks, and the CDC recommends that physicians report positive tests to the health department.  Approximately 20% of infections are recognized as outbreaks each year. Medical doctors may diagnose HUS by low platelet count, anemia, or kidney failure in the patient.

If you have contracted E. Coli, contact the Law Firm immediately.  We will work tirelessly to recover for your pain, suffering, lost wages and medical bills.