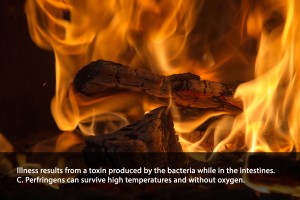 “Clostridium Perfringens,” or C. Perfringens, is among the most common foodborne illnesses in the U.S., causing an estimate of one million cases per year.  Outbreaks involving multiple infected individuals number in the range of ten to twenty per year. Illness results from a toxin produced by the bacteria while in the intestines. C. Perfringens can survive high temperatures and without oxygen. Symptoms of infection include watery diarrhea and exceedingly painful stomach cramps.  In the large majority of cases, fever and vomiting are not reported as symptoms. Clostridium Perfringens food poisoning illness arises within six to twenty-four hours after ingestion of the contaminated food product and begins suddenly, usually lasting for twenty-four hours or less. 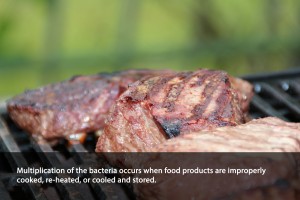 Clostridium Perfringens is a bacterium found in the intestines of humans and animals.  The bacteria are always present in human intestines, but illness occurs when large numbers of the bacteria are ingested.  Multiplication of the bacteria occurs when food products are improperly cooked, re-heated, or cooled and stored.  Because the bacteria can multiply rapidly within the range of 68⁰F to 140⁰F, foods should be cooked to and kept at a temperature above 140⁰F before ingestion. Reheated foods should be cooked to at least 165⁰F.  Food sources most commonly associated with contamination are meats, meat products and gravies.

Clostridium Perfringens food poisoning more severely effects children, the elderly and the sick.  Such individuals can experience lasting symptoms for up to two weeks. Outbreaks commonly occur in settings where large amounts of food are prepared hours before ingestion.  Such settings include school cafeterias, hospitals, nursing homes and prisons.

Hospitalization can occur due to dehydration resulting from the symptoms, and treatment may include rehydration by intravenous (I.V.) means.  Some deaths have been reported as a result of complications of dehydration or other circumstances.  Though very rare in the U.S., a serious, often fatal illness may result when Type C strains are ingested in large number. This condition is called “Enteritis Necroticans” or “Pig-Bel Disease,” and involves infection and necrosis (the death of living bodily tissue) of the intestines.

The simple medical phrase used to define infection is “Perfringens food poisoning.” Medical laboratories identify the bacteria by conducting a test on an infected person’s stool. The infection is either determined by identifying the type of bacterial toxin produced by C. Perfringens present in the stool, or by counting the number of bacteria present in the stool (approximately 106 spores per gram).  The stool should be tested within 48 hours after symptoms arise. Testing results are usually determined within one to three days.

If you have contracted Clostridium Perfringens food poisonings, contact the Law Firm immediately.  We will work tirelessly to recover for your pain, suffering, lost wages and medical bills.