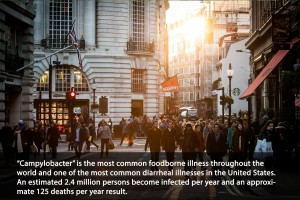 “Campylobacter” is the most common foodborne illness throughout the world and one of the most common diarrheal illnesses in the United States. An estimated 2.4 million persons become infected per year and an approximate 125 deaths per year result.  Campylobacter is a general term that includes multiple strains of bacterium.  The symptoms associated with Campylobacter food poisoning illness are diarrhea, which can be bloody, stomach cramps and pain, fever, nausea and vomiting.  Symptoms usually arise within two to five days after a person is exposed to the bacteria and persist for about one week, though some infected persons have no symptoms at all.  Thus, the range of reactions can span from no outward symptoms to death in rare cases. Illnesses generally occur in isolated instances; outbreaks in a specific geographical or community population are less common.

How Campylobacter Food Poisoning is Contracted 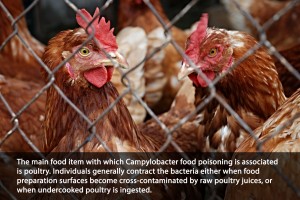 The main food item with which Campylobacter food poisoning is associated is poultry. Individuals generally contract the bacteria either when food preparation surfaces become cross-contaminated by raw poultry juices, or when undercooked poultry is ingested. Infection may also arise from other sources, such as contaminated water or unpasteurized milk. Water can become contaminated by infected feces. Milk may be contaminated if the cow it was drawn from was infected. Contaminated water sources are a common cause of outbreaks. The bacteria are sensitive to oxygen and drying, thus freezing foods is usually effective in reducing or eliminating their numbers. Infections occur more frequently in summer months than in the winter.

The immunocompromised may be at a greater risk than other individuals; the bacteria can spread to the blood stream and cause a life-threatening infection that weakened immune systems cannot effectively fight. Travelers to foreign areas are more at risk, as Campylobacter food poisoning is common in developing countries.  Infection in infants have been reported where children have been exposed to poultry packaging in grocery shopping carts.

Some individuals infected may develop arthritis over time. In few instances, a serious disease, “Guillain-Barré Syndrome,” may result.  Though rare, the syndrome may affect an individual’s nerves several weeks following recovery from the main symptoms.  The infected individual’s immune system may attack the body’s nerves, which can result in short-term paralysis capable of lasting for weeks.

Infection with Campylobacter is diagnosed as “Campylobacteriosis.” Medical laboratories identify the bacteria by conducting a test on an infected person’s stool. Though most infected individuals recover without treatment, antibiotics may be prescribed for those with more severe symptoms and will ultimately shorten the duration of the symptoms.

If you have contracted Campylobacter food poisoning, contact The Food Poisoning Lawyers @ the Merman Law Firm immediately.  We will work tirelessly to recover for your pain, suffering, lost wages and medical bills.