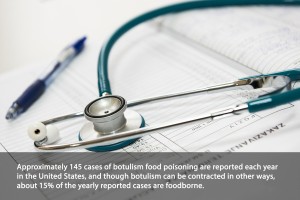 “Botulism” is a very rare, but very serious, paralytic illness. Strains of bacterium Clostridium Botulinum, Clostridium Butyricum, and Clostridium Baratii produce a toxin that disrupts the proper functioning of the nerves. Foodborne botulism occurs when an individual ingests food that contains the toxin, and illness can arise by ingesting a very small amount. Approximately 145 cases of botulism food poisoning are reported each year in the United States, and though botulism can be contracted in other ways, about 15% of the yearly reported cases are foodborne. 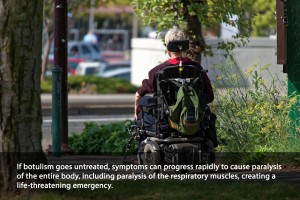 Botulism food poisoning can prove fatal. Contraction should be considered a medical emergency. When an outbreak is identified – when multiple people become infected by a contaminated food product – it is considered a public health emergency. Any person who believes that he or she may be suffering from the symptoms of botulism should seek immediate medical attention. If botulism goes untreated, symptoms can progress rapidly to cause paralysis of the entire body, including paralysis of the respiratory muscles, creating a life-threatening emergency. Though only a small percentage of cases (3% – 5%) result in death per year, many of those deaths are attributed to respiratory failure due to the toxin-induced paralysis of the respiratory muscles.

If the infection is caught early, physicians may induce vomiting or use an enema to remove the contaminated food from the infected individual’s digestive system. Botulism can be treated by an antitoxin, which, if taken before paralysis ensues, can stop the symptoms from worsening and reduce the time required for recovery. In more severe scenarios, where the symptoms have progressed to cause paralysis, especially of the respiratory muscles, a breathing machine may be required and medical care may be necessary for the duration of recovery. In such cases, recovery may take weeks or months, depending on the severity of the individual’s condition. Proper medical attention will enable symptoms to improve, though slowly, as the nerves will need time to regenerate.

How Botulism is Contracted

Because the bacteria grow best in conditions where oxygen is low, illness usually arises from ingesting food products that were improperly canned. Generally, home-canned foods are the culprit, where a preparer did not follow proper canning procedures. Though very rare – usually once in a decade – contamination can occur in large manufacturing processes, triggering outbreaks. Such outbreaks have originated from foods such as canned cheese sauce, peppers, tomatoes, and carrot juice.

A medical doctor will be able to determine infection by evaluating an individual’s medical history and conducting a physical exam. However, as other conditions can produce the same or similar symptoms, test may need to be conducted to rule out such other conditions. Your doctor may perform a brain scan, a spinal tap, and an EMG, among other tests. Tests for the actual toxin can be conducted by state health labs and the Center for Disease Control.

The Law Firm can help you recover for your losses related to Botulism outbreaks and recalls. Please contact us for your free consultation.