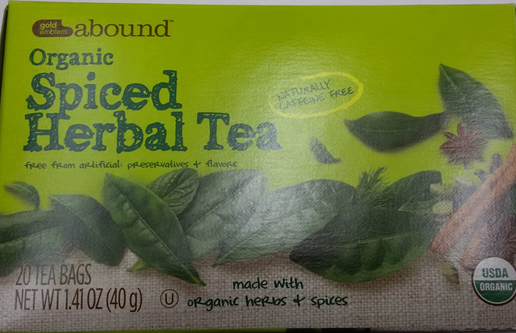 CVS Pharmacy recently issued a voluntary recall for Gold Emblem Abound brand organic spiced herbal tea. The recall occurred after one of the ingredients in the tea tested for Salmonella bacteria. Herbal tea involved in the recall was packaged in 1.4 ounce cartons, and can be identified by the UPC number “050428541043” and a Best By date of March 18, 2018. Products affected by the recall were distributed to CVS stores nationwide. So far, no cases of Salmonella poisoning have been associated with this recall.

Health officials have warned that any recalled tea found in the homes of consumers should not be consumed. Because the product has a very long shelf life and large scale distribution, health officials are especially worried about cases of Salmonella poisoning occurring. If you recently purchased Gold Emblem Abound tea, check the UPC number and Best By date to see if your product was involved in the outbreak. Any products affected by the recall can be returned to CVS for a full refund.