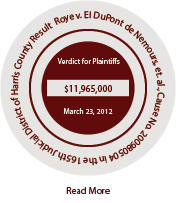 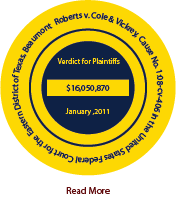 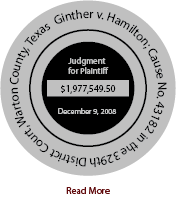 We accept a limited number of food borne illness cases, so we can deliver the focused and personal attention that each client deserves.   We approach every case with the conviction to work tirelessly to find and pursue the best way to succeed.

Derek Merman has helped his clients recover millions of dollars in verdicts and settlements during his career.  Some of their representative cases include:

Mr. Roye was badly burned when he attempted to repair a steam trap on a line at the DuPont chemical plant in La Porte, Texas.  Mr. Roye received burn injuries over 46% of his body when the ground collapsed and dropped him into a hole three-feet deep and full of boiling water.  Mr. Roye barely escaped with his life.  DuPont claimed the accident was the fault of Mr. Roye and his employer but we were able to prove through exceptional expert testimony and argument that Mr. Roye could not have appreciated the hidden danger.  Mr. Merman was co-lead counsel with the Barton Law Firm and received a verdict of $11,965,000 in actual damages for Mr. and Mrs. Roye after three weeks of trial.

Mr. Merman is sometimes called upon by other law firms to try cases that they have prepared for trial.  With lead-attorney experience in two verdicts in excess of $10,000,000 before he turned 40 years old Mr. Merman’s reputation as a trial lawyer puts him in high demand for these types of assignments.  Mr. Merman typically tries four or more cases to verdict every year and his reputation for success is growing.

Roberts v. Cole & Vickrey, Cause No. 1:08-cv-406 in the United States Federal Court for the Eastern District of Texas, Beaumont Division

Mr. Roberts was taken to the Jefferson County Jail for unpaid parking tickets in April of 2007.  While being booked-in, he was assaulted by Officer Cole and received injuries to his face that required stitches.  While he was being bonded out to get medical treatment, he was again assaulted by a Jefferson County Jailer, Officer Vickrey.  Following the assaults, the Sergeant on duty high-fived another officer.  In a case that received intense media exposure, Mr. Merman and his co-counsel Robert Luke won an unprecedented verdict in Jefferson County against the offending officers.  The County was dismissed from the suit on summary judgment, which Mr. Merman appealed and argued before the 5th Circuit Court of Appeals in New Orleans on May 1, 2012

Roberts v. Jefferson County, Cause No. 1:08-cv-406 in the United States Federal Court for the Eastern District of Texas, Beaumont Division

Originally, Mr. Merman sued both offending officers and the County for which they worked for the assaults on Mr. Roberts.  Mr. Merman believed that he had built a strong case that the assaults were “custom and practice” at the Jefferson County jail.  In addition to eliciting testimony to that end from several witnesses, the video of the assaults (captured on the Jail’s closed-circuit television) showed a total lack of surprise from the dozen or so officers that witnessed the assaults.  When the verdict against the police officers (above) showed how important this issue was to the citizens of Jefferson County, Mr. Merman appealed the Judge’s dismissal.  Never one to go down without a fight, Mr. Merman faces off against the County in  the 5th Circuit Court of Appeals on May 1, 2012.  A link to his argument is available here and on the Firm’s home page.

This case was certainly not one of Mr. Merman’s biggest wins but it is one that he is very fond of.  Mr. Figueroa had been promised a house in exchange for physical labor he performed for Houston Poultry & Egg, Inc.  Once Mr. Figueroa had performed the work, the company refused to comply with their end of the bargain and tried to have Mr. Figueroa evicted from his home.  Although the agreement was not in writing, Mr. Merman was able to prove at trial that the agreement existed and that Mr. Figueroa was entitled to over $10,000 for his work.  Mr. Merman hates bullies and this company was trying to bully Mr. Figueroa because they thought they could get away with it.  They didn’t get away with it.

Mr. Ginther was hit from behind by an uninsured motorist, which caused his previously-injured back to become worse; he required surgery to repair it.  As the first step in a four-year campaign to recover for his client’s medical bills, lost wages and pain, Mr. Merman received a judgment of almost $2Million.  He later filed suit against Mr. Ginther’s insurance company and recovered a confidential settlement under his uninsured/underinsured motorist coverage.

We have also  handled numerous cases that range in settlement from a few thousand dollars to several million dollars in settlement. Damages depend on the facts of the case, but in every circumstance, the Merman Law Firm endeavors to achieve high settlements and verdicts for each and every client.

Contact the Food Poisoning Lawyers at the Merman Law Firm – 713-351-0679. We are dedicated to providing personal service to victims of food-borne illnesses. FREE CONSULTATION.