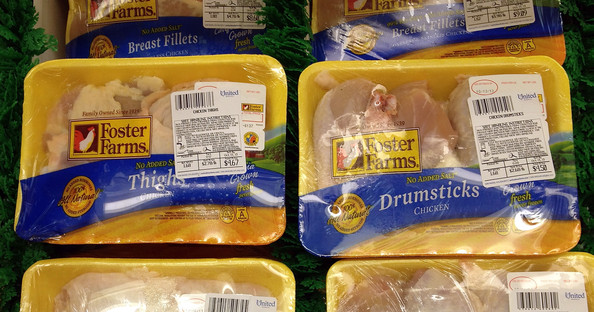 Foster Farms sells fresh chicken and turkey, frozen heat-and-eat chicken and turkey, fully cooked and refrigerated chicken and turkey, individually frozen chicken, deli meats and franks and corndog products. http://www.fosterfarms.com/products/. The company planted its beginning roots in 1939 in Modesto, California and now has farms throughout the Pacific West, where the company’s chickens are raised. http://www.fosterfarms.com/about/index.asp. Though Foster Farms strives to provide superior quality and taste, the 2013 outbreak of Salmonella associated with its chicken products is not in the first.

On August 2, 2012, the Centers for Disease Control (CDC) PulseNet detected a cluster of 19 Salmonella Heidelberg isolates that matched an outbreak pattern associated with Foster Farms’ chicken products back in 2004. When the interviews of infected individuals in 2012 indicated exposure to Foster Farms’ chicken, a thorough investigation was initiated. An outbreak was announced after the National Antimicrobial Resistance Monitoring System (NARMS) retail meat surveillance program identified the Salmonella strain in Foster Farms’ chicken purchased from Washington and Oregon in October, 2012.

In the 2012 outbreak, a total of 134 persons in 13 states were infected with the outbreak strain of Salmonella Heidelberg. About 31% of the patients were hospitalized, but no deaths were reported. The majority of the illnesses occurred in west coast states: Washington, Oregon, California and Alaska.  The outbreak was determined to have ended according to a weekly report published by the CDC in July, 2013. However, a new outbreak has been recently reported. http://www.cdc.gov/mmwr/preview/mmwrhtml/mm6227a3.htm.

As of October 29, 2013, the CDC reported a total of 362 persons infected with outbreak strains of Salmonella Heidelberg. The reported infections are distributed across 21 states and Puerto Rico, the most significant numbers being in California (268), Washington (15), Arizona (14), and Texas (11). Approximately 38% of infected individuals have been hospitalized, but thankfully, no deaths have been reported.

On October 7, 2013, the USDA issued a Public Health Alert due to concerns that the Salmonella infections being reported were associated with Foster Farms’ chicken products produced at three of the company’s California facilities. By October 10, 2013, the USDA announced that Foster Farms had implemented significant changes to their slaughter and processing procedures, so that they could continue operations despite the outbreak concern. (http://www.cdc.gov/salmonella/heidelberg-10-13/index.html).

This outbreak investigation is ongoing, and the USDA will take additional actions and expand the investigation as new evidence rolls in. No recalls have been issued for any specific food products. Foster Farms has not issued an official recall because it claims officials at the USDA have said that the company’s products meet U.S. standards and are safe if properly handled and fully cooked.  (http://www.oregonlive.com/health/index.ssf/2013/10/foster_farms_salmonella_outbre.html). However, the Merman Law Firm anticipates a Foster Farms chicken recall and lawsuits are imminent.

The most common symptoms of Salmonella infection include diarrhea, abdominal cramps and fever within eight hours to three days after consuming the contaminated product. In healthy individuals, chills, headache, nausea and vomiting can last for five to seven days after initial symptoms appear.  For more information about Salmonella, please visit our Salmonella information page here.

Any illness possibly associated with the outbreak should be taken very seriously. The outbreak strains of Salmonella Heidelberg are resistant to several commonly prescribed antibiotics, so infection may be associated with an increased risk of hospitalization or treatment failure in infected individuals. Heidelberg is a common strain of Salmonella that causes life-threatening illness in people with weak immune systems, such as children, the elderly and those with cancer or HIV infection.

If you or a loved one suspects you are infected with Salmonella as a result of consuming Foster Farms Chicken, seek medical attention immediately.  Even if your condition is not life-threatening, blood and stool samples may be necessary to establish the source of your illness.  Contact the food poisoning lawyers at the Law Firm for competent, compassionate representation. We are here to help.