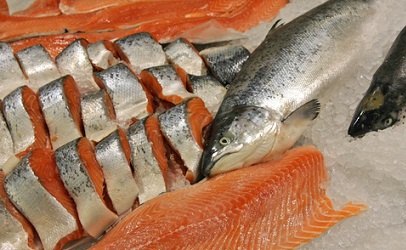 Just minutes ago, the Listeria Lawyer at the Law Firm learned that the FDA announced an expanded recall of Whole Foods Market Whole Catch Wild Alaskan Sockeye Salmon.  The Listeria Lawyer has been following this story since it broke yesterday.  There are now a total of two lots of wild salmon recalled by Whole Foods Market because the salmon may be contaminated with Listeria.

On January 28, 2013, Whole Foods Market announced a recall of one lot of its Whole Catch Wild Alaskan Sockeye Salmon (cold smoked and sliced).  The package, shown below, is a flat, gold and black, vacuum-sealed package. The lot code (7425A2298B) is printed on the back of the package, on the upper left side. The UPC code is 0 99482 40880 0.  Originally, Whole Foods reported that the salmon – listeria was sold in twelve states: Colorado, Connecticut, Florida, Idaho, Kansas, Maine, Massachusetts, New Jersey, New Mexico, New York, Rhode Island, and Utah.  The Listeria Lawyer at the Merman Law Firm learned minutes ago from the U.S. Department of Agriculture that another lot of Whole Catch Wild Alaskan Sockeye Salmon has been recalled for potential listeria contamination.

The recall of Salmon – Listeria has been expanded to include an additional lot sold in an additional six states.  The Whole Catch Wild Alaskan Sockeye Salmon (4 oz), UPC code 0 99482 40880 0 has been added to the recall.

Symptoms of Salmon Listeria, like all listeria, are flu-like in nature.  This Salmon Listeria is particularly dangerous right now, during flu season, when a person infected with salmon listeria may mistake it for the flu.  Symptoms usually begin with diarrhea, but can also include fever, body aches, headaches, stiffness in the neck, loss of balance, disorientation and convulsions. Other gastrointestinal problems may develop from salmon listeria exposure as well, such as a general irritation of the digestive tract.

Salmon Listeria may create a catastrophic situation for pregnant women

Symptoms of Listeria infection usually arise twenty-four hours after ingestion and may persist for two days in healthy individuals.  Individuals who are prone to infection may have longer lasting and more complicated symptoms.  Listeria in general, and salmon listeria especially, is hazardous for pregnant women.  Pregnant women should be particularly careful to guard themselves against exposure to contaminated foods, as infection can lead to miscarriage, stillbirth, premature delivery, and a possible life-threatening development of infection in a newborn.  The reason this salmon listeria is so dangerous is that lots of pregnant women try to eat healthy during pregnancy and especially want to take in as much Omega-3 Fatty acids as possible to aid in their baby’s brain growth.  So the most at-risk segment of the population, pregnant women, are also the ones most likely to ingest the salmon listeria.  That is a potentially catastrophic situation.